The world ended the week with a tailspin from S&P downgrade of the triple-A (AAA) rating the US has held for 70 years, saying the budget deal recently brokered in Washington didn’t do enough to address the gloomy long-term picture for America’s finances

S&P reduced the U.S. one level to AA+ while keeping the outlook at “negative” as it becomes less confident Congress will end Bush-era tax cuts or tackle entitlements. The rating may be cut to AA within two years if spending reductions are lower than agreed to, interest rates rise or “new fiscal pressures” result in higher general government debt.

The state of the stock market was already grim last week before the U.S. credit downgrade — and got worse after Thursday’s gut-wrenching slide that marked the worst decline since 2008. All told, we have endured an 11% rollback in the S&P 500 across the last 11 trading days as investors headed for the hills.

S&P ratings for good long term investments can be related as such:

BB: more prone to changes in the economy
B: financial situation varies noticeably
CCC: currently vulnerable and dependent on favorable economic conditions to meet its commitments
CC: highly vulnerable, very speculative bonds
C: highly vulnerable, perhaps in bankruptcy or in arrears but still continuing to pay out on obligations
CI: past due on interest
R: under regulatory supervision due to its financial situation
SD: has selectively defaulted on some obligations
D: has defaulted on obligations and S&P believes that it will generally default on most or all obligations
NR: not rated

Of the 127 sovereign nations that S&P monitors, only 19 have AAA ratings. The agency has never lowered its outlook for the United States, and the nation has never had a rating lower than AAA.

Countries which are in the AAA ratings:

The Guardian has also put forth a quick view of the key countries among the top ratings: 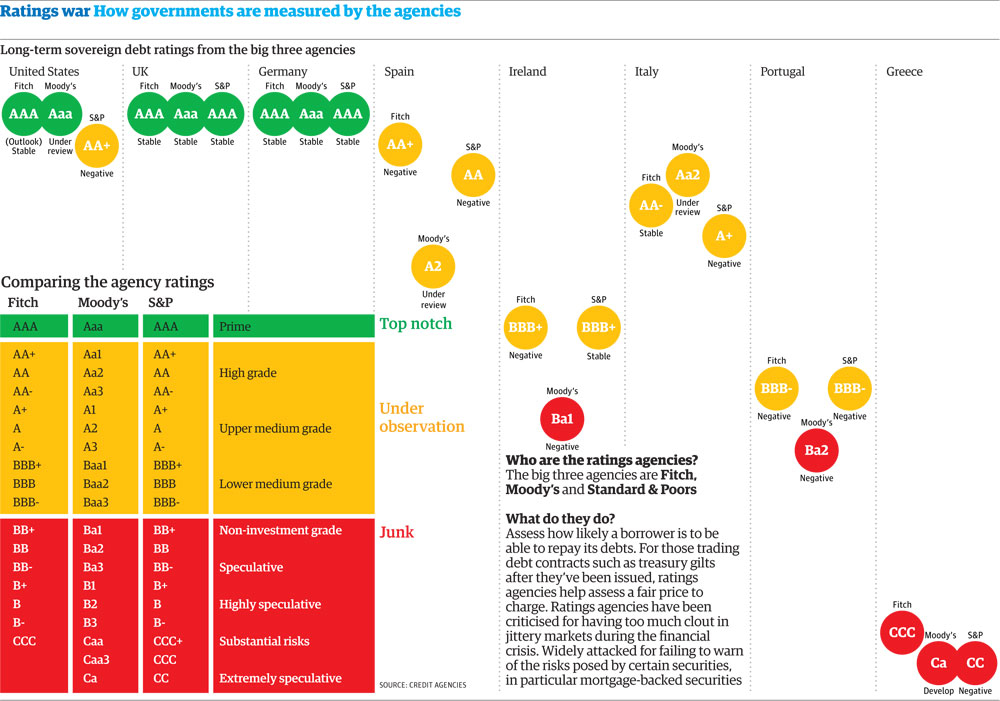 Now we have to prepare ourselves mentally to brace through the market turbulence and head winds before we can set sight for a calm trading markets where the longer term need to refocus on world economic developments.