Apple (AAPL) just announced their fiscal 2013 Q1 results which came in ‘unspectacular’ against what traders were anticipating. Nevertheless, it is still a very decent report card if we do look into the details.

Apple has also started to share the good revenue growth in Greater China – including Taiwan and Hong Kong – revenues were $6.83 billion, up from $5.43 billion in the previous quarter and $4.08 billion a year ago. That represents growth of 26 percent and 67 percent, respectively.

It is a definite conclusion that the stellar growth in EPS is gone though the absolute EPS for Q1 2013 is still very decent. Apple expects revenue to rise about 7% in the current period after reporting an 18% gain in the holiday quarter. Earnings per share rose 7.23% when adjusting for the missing 14th week in Dec 2012 vs Dec 2011. 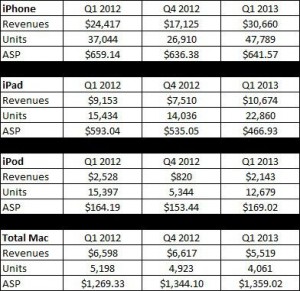 a. Mac – sales were extremely disappointing. In addition to being a weak overall PC market, Apple appeared to have some supply constraints. Thus, it was not able to get its new line totally out for the holiday season.
b. iPhone – ASP is halting around $645 though unit growth was up nearly 39%.
c. iPad – 59.5% growth over last year’s period when you factor in the extra week. But ASP fell as expected with the new iPad mini but this has definitely help to boost the overall sales volume.
d. iPod – unit sales came in slightly above expectations.

Apple provided the following guidance for its fiscal 2013 second quarter:

In summary, the market has not been very rational w.r.t. AAPL.

Google sells for 31 times trailing earnings and has declining average click prices.
Apple sells for less than 12 times earnings and average selling prices are stable or increasing across their product lines.

The hanging sentiments from all traders/investors which Apple (AAPL) will need to resolve are:

a. How to maintain the iOS market share, esp iPhone (accounts for 50% of the revenue) if there is no new product lines
b. Any new innovations to bring in new money on the table to pad the eroding ASP of the existing product lines
c. Positive works from the recent organisation change – Apple’s iOS chief Scott Forstall and retail chief John Browett who last left the company

Till then, there may not be a good catalyst to reverse the price downtrend even though the fundamental support price of Apple is very near.

← Data roaming in Korea – Rent local Telco Sim Card for web surfing | Travel Tips
New Jailbreak for iOS 6.X and Apple A6, A5 devices is out! – Evasi0n | IT Guides →