Last night (29th April 2011), US released their latest US GDP economic data which shows that United States GDP increased at an annual rate of 1.8 percent in the first quarter of 2011. In the fourth quarter, real GDP increased 3.1 percent.

The positive contributions came from:

The detailed changes in each of the GDP components are:

This is possibly why Bernanke on 28th April 2011 disclosed that the Fed plans to freeze the size of its balance sheet once it has completed its $600 billion bond-buying program. This is accomplished by reinvesting maturing mortgage-backed securities and Treasurys.

During the press conference, Bernanke said he didn’t know when the Fed would tighten interest rates and that language in the Fed’s statement on “extended period” for keeping low rates suggests that the central bank would wait at least a “couple of meetings” before acting — in other words, August or September.
“Extended period is conditioned on resource slack, on subdued inflation and on stable inflation expectations,” Bernanke said. “Once those conditions are violated or we move away from those conditions, that’s the time we need to begin to tighten.” 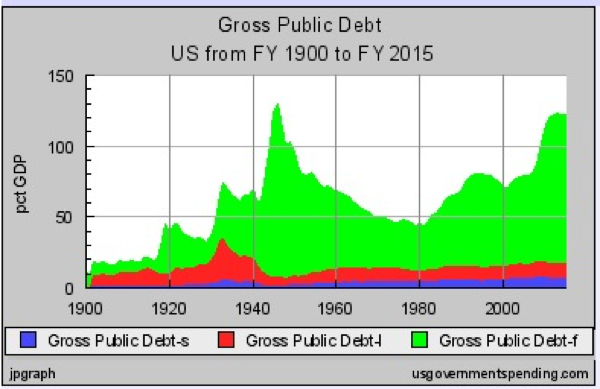 But it was World War II that really entered new territory. After the end of the war in 1946 federal debt stood at almost 122 percent of GDP, with state and local debt adding another 7 percent. For the next 35 years successive governments brought down the debt, but then came President Reagan.

He increased the federal debt up over 50 perent of GDP to win the Cold War. President Bush increased the debt to fight a war on terror and bail out the banks.

President Obama is increasing it to fund anything that needs a cool trillion or so.