Xiaomi unveiled its much-anticipated flagship the Mi 5 during March 2016 in China followed by India in May 2016. This is one important milestone for Xiaomi as Mi 5 is the first Xiaomi phone with a physical home button and front-mounted fingerprint sensor. (Last year’s Redmi Note 3 has a scanner on its reverse.) 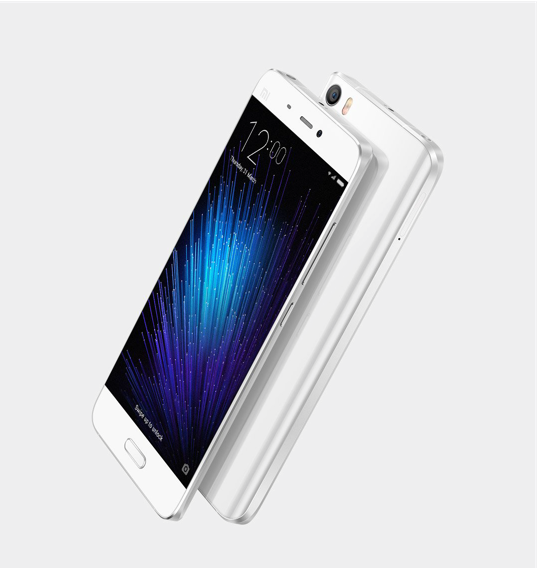 It is important to note that there are 3 versions of the Mi 5:

Unlike previous Xiaomi phone,Mi 5 phone comes in a colourful box and the contents of it include a charging brick, USB type C cable, SIM ejector pin and user guides.

The Mi 5 is smaller than some other flagship phones offered in the market, with a 5.15-inch screen.The 428 ppi resolution is a tad lower than a 577 ppi Galaxy S7.

The design of the exterior of Mi 5 is reminiscent to that of a Galaxy S6. It is a sleek combo of metal and Gorrilla Glass. The glass back of the device curves along the long side, just like the Galaxy S7 and the Xiaomi Mi Note. All this greatly help to operate the Mi 5 in one hand mode.

Using the top-of-the-line Qualcomm Snapdragon 820 processor and 3 GB of RAM, it is remarkably fast at opening, closing, and moving through apps.The standard version of Mi 5’s Snapdragon 820 only runs at 1.8GHz instead of the 2.15GHz you’d get on a Galaxy S7. This phone handles the most intensive games on mobile very well and the graphics look stunning.Only downside,the device gets a little warm easily.

The metal frame, which is also curved on each side of the phone, goes around the device and it adds a lot of premium look and feel.

On the top of the phone, we have a headset jack and the IR blaster to control the TV or other devices.

Lastly, on the bottom of Mi 5, we have the microphone, loudspeaker and the USB type C port.

Beneath the display is an oblong, metal-ringed home button with built-in fingerprint reader that looks pretty much identical to Samsung’s.

The fingerprint scanner is fast and accurate but it does not work straight from the standby mode i.e. one will need to press home or power button first.

To the left and right of the home button are two capacitive buttons that act as “back” and “recent apps”.

Despite the Mi 5’s slim build and impressive performance, Xiaomi managed to squeeze in a 3,000 mAh battery.

The Mi 5 boasts a 16-megapixel camera with f/2.0. The camera is flush with the phone’s back. While the still camera also sports optical image stabilization (OIS), which does an excellent job at compensating for camera shake.

OIS is only available in still camera mode: it doesn’t compensate for shake on captured video.

the Mi 5 ships with Android 6.0 Marshmallow with a custom interface called MIUI.While the home screen is more akin to iOS than Android, with no app drawer for stowing away less frequently used apps, it still supports widgets, and offers a clever way to bulk-move apps across screens or into folders.

Unlike the stock Android 6.0, MIUI 7 versus does not have these features: