Finally, on 1st June 2011, Google GOOG released the code for their +1 button (termed ‘Plus One’). This is Google’s real answer to the Facebook Like button and seek a new footprint in the social media arena.

Google +1 Plus One is a way for users to recommend webpages to their friends, contacts, and other web users by giving it a public stamp of approval that will appear on English searches on Google.com in modern browsers. Google plans to release +1 annotations worldwide in the future e.g. on Google.com.sg.

When you are signed in to your Google account, you may see that your Google search result snippets are annotated with the names of your friends and contacts who have recommended (+1’d) it – this includes people in your Gmail or Google Talk chat list, people in your My Contacts group in Google Contacts, and people you are following in Google Reader and Google Buzz. If none of your connections have +1’d the page or you are not signed in, you will see the aggregate number of +1’s the page has received from other web users.

Using my blog entry (1st entry) when featured in the Search Result page in Google.com, once it has been ‘Google +1’ed, it will be denoted with Google +1 icon next to the title. For the other entries, you can Recommend the link by clicking on the Google +1 icon. It will also show all the Google users who last recommended (Google +1 ed) the entry.

– It is a form of recommendation by 3rd party users who read about the page and decide to cast a vote of confidence for others to follow the same references.

– It registers and display the aggregated count of recommendations.

– It can be implanted onto any online page.

– It is used as a means to rank competing entries against relevancy defined by community.

– A Google +1 Button will show up on the Google search results – everyone who uses Google as a search engine will see it, not just your “friends”.

– To tune the relevancy display for Facebook Like post, one has to effect tweaks in the meta data (e.g. Attributes or Open Graph Tags). But for Google +1, one can still depend the overall Google Relevancy score to display the search results.

What does all these mean to Online Marketers or Webmasters?

In my personal perspective, both implementation has a common drive, to impart confidence in the relevancy of the content driven by community. For Facebook Like, it is among social contacts – your ‘Friends’ network whilst for Google +1, it is against the community for the article listed in the specific keyword search results page.

When a webmaster adds the Facebook Like button he expects that his Social Media traffic will be increased. On the other hand when he adopts the +1 buttons, he should expect to receive more organic traffic that has a “Social Flavor”. This is because not only the number of +1’s will eventually be used as a signal but also because the users will recommend sites to their friends not only via Social Networks but also via the Search.

Facebook Like-ed page will get featured in Friends’ wall postings but its benefit & awareness will only last until it is lost in the stream of other newer posts. One would never search for content in Facebook as much as to consume ‘live’ contents.

Unlike Facebook, Google +1 last a long while and is complimentary to improve organic visibility of the content over time.

Google capitalizes on their size and they are likely to push heavily their new button. They give incentives to the webmasters to adopt the +1s because they know that this will affect their Rankings and the amount of Organic Traffic that they receive.

How do you setup Google +1 button on your site / page? 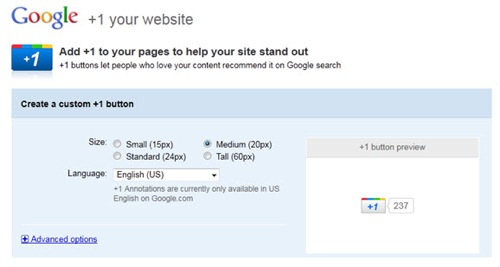 Step 2: Use the logo format suitable for your website (small, medium, standard and tall)

Step 3: Place the code given below in head tag or before closing body tag

Step 4: Place below tag on your webpage

A simple illustration using my blog page is illustrated below.

You can add a Like button to any page with an iframe tag: 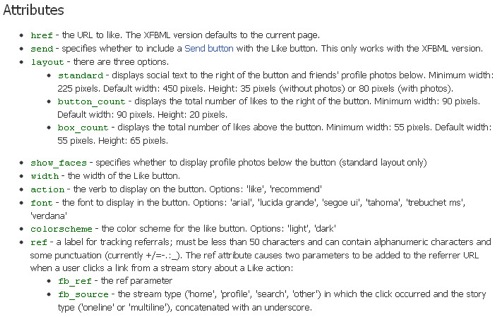 When your Web page represents a real-world entity, things like movies, sports teams, celebrities, and restaurants, use the Open Graph protocol to specify information about the entity. If you include Open Graph tags on your Web page, your page becomes equivalent to a Facebook page. This means when a user clicks a Like button on your page, a connection is made between your page and the user. Your page will appear in the “Likes and Interests” section of the user’s profile, and you have the ability to publish updates to the user. Your page will show up in same places that Facebook pages show up around the site (e.g. search), and you can target ads to people who like your content.

As Google +1 is just launched, there are some restrictions of who can readily sees it:

The +1 button shows up for signed-in users of Google.com in English, using a modern browser.

Who can see annotations from +1 buttons?

Everybody can see aggregate annotations for the Google +1 buttons. In addition, Signed-in google users will be able see personalized annotations from:

The Google +1 button are not shown on mobile search results at this time. Any Google user can choose whether or not to display their +1’s on their Google profile.